Sex And The Skeptic 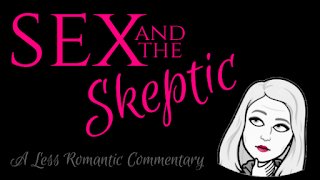 Romantic true love doesn’t exist. I hate to break it to you, but it doesn’t. At least not in the way our culture tells us it does. Sex on the other hand does exist and is the drive behind most of what we do as humans. Yes, I’m cynical but I prefer to call myself a skeptic because a girl can always change her mind.

I grew up watching Sarah Jessica Parker in 80’s and early 90’s movies like Girls Just Wanna Have Fun, Flight of the Navigator, and Hocus Pocus. So, when I first saw that she was doing a HBO original series about sex, Sex And The City, the 80’s kid and sex geek in me were beyond excited. But when I began to watch the show, I found myself not identifying with Carrie Bradshaw as much as I did with my then new idol, Samantha Jones.

Sex and the Skeptic is my blog series commentating on the show from a well… let’s just say, less romantic point of view. ­

The series opens with a introduction to our characters Carrie, Miranda, Charlotte, Samantha, and of course the city of Manhattan. The first half of this pilot episode focuses on the difficulties of women in their 30’s finding eligible bachelors in the city.
The reality of this situation is stated very well by the men. It all basically comes down to biology, once a woman’s clock is ticking, men are suddenly holding all the cards. It seems women can only be the choosey ones during their time of high reproductive value. After that starts to wane, our sea of fish begins to diminish.
This is also reflected in society, women who are older, disabled, overweight, or are in any way seen as unhealthy are less reproductively appealing and in turn, less relevant.

Why should women in their 30’s settle?

There is something that happens to a woman when she enters her 30’s. Typically by this age we have been through enough bad relationships and have come into ourselves and have finally realized our own self-worth. We are willing to tolerate less than we were in our 20’s which makes finding a man that doesn’t have too much to tolerate harder.

I’m big supporter of this statement. Regarding feelings, they are only good when you want them. I can’t count how many times I’ve told friends if they don’t want to catch feelings for a casual lover, they better get up, put their panties on, and go home.
Regarding getting off and getting out like men do, I’d say every woman should try it at least once. We must get pleasing a man as the most important part of sex out of our number one concern slot. I also think that if more women did this more often, men would get a taste of their own medicine and realize a woman’s orgasm isn’t an unnecessary part of a sexual encounter.
After Carrie hooks up with an old lover and leaves after he pleases her and before he can get his, she later wonders why she didn’t feel more in control. I’d say that is because that isn’t who she is. Carrie is a romantic and seems to need more of a commitment with her sex. She not getting what she wants while the guy is. Unlike Samantha, who I doubt would feel less out of control.

I Have To Get Up Early

There is one scene is this episode that made me really think. Charlotte goes home with a man but stops him and goes home for the night before he can get what he wants. Later, Samantha goes home with the same guy and he tells her that he must get up early the next morning, so she can’t stay over. Samantha gets a look on her face in response like she knows she’s being used and although there is a slight sting from this being verbalized, she’s fine to continue.
Therefore it is much better to meet casual hook ups either in a neutral territory, hotel, back seat of a car, etc. or even better, at your place to insure the ball stays in your court.
The male/female power dynamic in sexuality is a tricky thing. Even when all a woman wants is to have casual sex, it still seems like the man is getting something over on her, like he is winning. That’s something I think about a lot and have yet to figure out how to work around.

The Introduction of Big and Great Love

This is probably the hardest pill for me to swallow throughout the series. Because Big will be Carries main love interest in the show, he is set up to be Prince Charming. We first see him turn down Samantha which a) would most likely never even happen and b) appeals to the female psychological desire cues. This scene is to show that Big is different. Something women look for and men try to convince us of but in the end, is just a fairytale.

When Big sees Carrie walking and gives her a ride home, not only do we see him as “rescuing” her, but we also see that he is wealthy giving him resources, something also psychologically desirable to women. In the car, they have this conversation:

Carrie: “Women who have sex then afterwards feel nothing”.
Big: “But you’re not like that”.
Carrie: “Well aren’t you”?
Big: “Not a drop, not even half a drop”.
Carrie: “Wow what’s wrong with you”?
Big: “Haha I get it, you’ve never been in love”.

This scene really gets under my skin. It’s not real and paints this picture of this one guy who will suddenly come along to rescue you and will be different from all the other men. He will be rich, believe in love, and want only you.

As a woman you are feed this story from the time you are a toddler watching Disney Princess movies learning that one day your prince will come. So, you wait and before you know it, you’re in your 30’s and all the good men are taken and you’re left having casual sex in the city.

It’s funny to me that the episode opens with the women wondering where all the great unmarried men are, when, they missed them all waiting for a fictional character they’ve been told is out there just waiting to sweep them and only them off their glass slippered feet.
at January 21, 2019