The Curious Mind Of A Slut 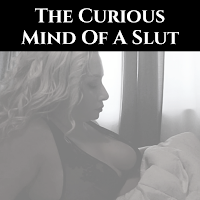 It's interesting to me and possibly no one else how much my own sexuality is based in curiosity. The majority of my sexual experiences have come from curiosity. The average person meets someone they find physically attractive, flirts, dates, and forms a relationship of some kind before wanting to have sex. Maybe this is typical female behavior. I'm not sure as I'm far from typical. But for me, I meet someone or see a personality online and my mind almost always takes it to a sexual place. I always think I wonder what he would be like in bed.

There is something special that happens with men in a sexual scenario that is unique to how he is in any other situation in his life. There is a different look in his eyes, a different tone in his voice, something that lays beneath the persona and ego he has created over his life comes to the surface and can only be experienced in those moments. It's raw and so deeply real that it's intoxicating to me. This is also something that can fade in a long term relationship. It's odd that the less you know a man, the more real his desire is with you. This is why men ask prostitutes for things they would never ask their wives for. It's that space that fascinates me. The space where they feel safe from judgment and their own ego. I see a man and I think about that and wonder who is he in that space?

This wonder for me trumps physical attraction on most occasions. I'm more interested in the mind of the man. For example, last night I had a dream about Neil deGrasse Tyson. For those that are not total science nerds like me, he is a astrophysicist and the host of several shows and a podcast. For some reason I dreamed I was going to a hotel with him and today when I think about it, yeah I would be interested to see him in that space.

Another man that gets my sexual curiosity going is Elon Musk.
His mind is so calculated and he runs so many innovative companies, I just wonder does he like to be dominated so that he can have a place and time where he isn't in control? Or maybe he is rigid and never lets his guard down. Maybe he doesn't even have sex because it's not something he finds necessary.

Joe Rogan, I feel would be someone it would be hard to break his fidelity. I've learned that men with very strong mental strength cheat less. Men who meditate, practice martial artists, etc. Men with a good amount of will power and self discipline. So I wonder, would it be difficult to break him sexually? I know that's rude to poor Joe's wife but it's how my brain works. I wonder if he's very primal in that space, rough rather than gentile.


I know this will sound crazy to just about everyone, but I'm thinking with my sexually curious mind, how it would be amazing to just be able to experience one night with whoever I wanted throughout my life. Not necessarily for sexual pleasure but for the pure knowledge of the moment. It seriously feels to me that somehow that's what my soul wants to do. Like a reporter traveling the world seeking interesting people to interview but my interview would be experiencing people in the space that so fascinates me.  I can imagine myself laying in bed as an old woman, looking back on my "interviews" with no regrets and proud of the knowledge I had gained. Curiosity satisfied.